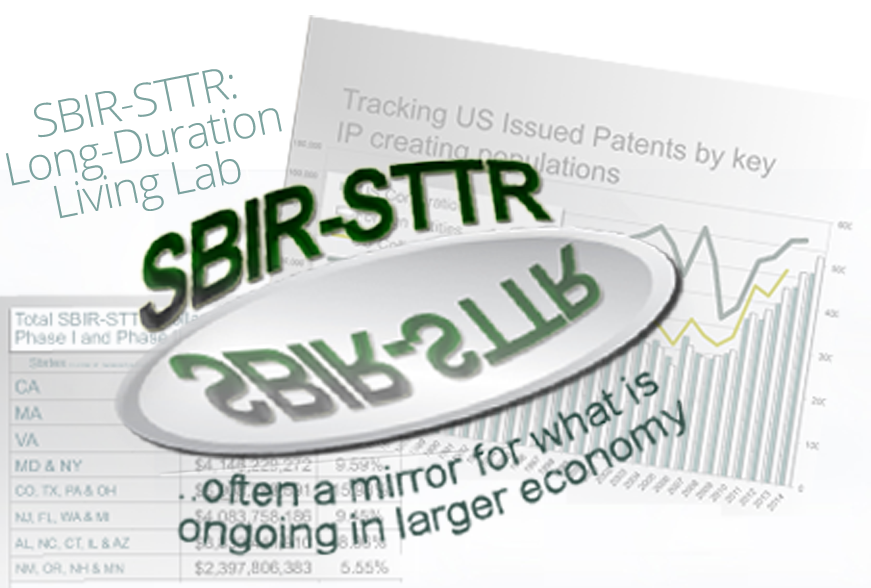 Passage of 1982 SBIR enabling legislation was one factor in a multi-pronged effort across legislative and regulatory space to address a seriously deteriorating US economy:  high unemployment rates with systemic and extensive job loss, energetic foreign competition, sky-high interest rates and minimal capital access.
As it was then - as is now - and in ensuing 30+ period, SBIR a useful and
sometimes powerful reflection of changes and condition of US economy .

Neither can what we do - and how we do it - be in any way considered a form of Crowd-Sourcing or Speed-dating. The former is becoming a useful and potentially powerful tool in various settings; but, frankly, the value of the latter in almost any business-related context simply escapes me.

ExPres: Expertise Precision Sourcing:
The ASSET system is solidly anchored in (now) powerful relational databases initiated by the Innovation Development Institute soon after passage of the SBIR enabling legislation as a useful means of

The trend analyses these data also make possible, clearly shows that collectively the SBIR community is by far the largest single concentration of technical talent:  almost three times more graduate level engineers and scientists being SBIR employed than all academic researcher combined.  However, unlike the fairly well-defined (and identifiable) population of academic and non-profit research institutions, for those wishing on any systematic basis to engage this talent

can be a daunting challenge.  SBIR-involved firms are - by definition - small in size: the overwhelming percentage employ fewer than 25 people. They are over the map geographically, in terms of stage of business development, plans for their firm, resource access, areas of technical focus and by any other variable one might wish to list.
Even among more established entities, if their SBIR involvement - and thereby funding agency identity

that Tech Seeker may never find what they seek or the hidden gem that could/would be potentially important.

Massively distributed R&D facility:
Instead we opt to think about - and address - the SBIR community as the equivalent of a massively distributed R&D facility within its ranks being some onyl one or two - but often many small firms of potentially considerable interest.  The ASSET system is the means by which the value of what resides in that facility can be most effectively realized.

Both these contact initiation and delivery systems, along with a 24/7 tracking of all SBIR awardees of interest and/or consequence to a particular Tech Seeker, are usefully integrated though a sophisticated and secure, online Office Suite System.